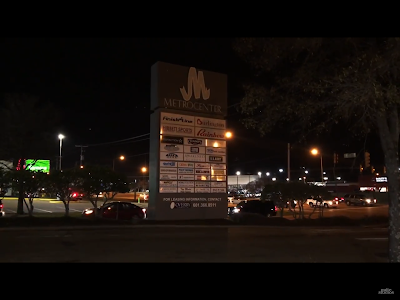 Anyone who has grown up in Jackson will remember the procession of shopping malls that have graced our city, each one being put out of business by the next, more illustrious, mall: Jackson Mall, Metrocenter, Northpark, and Renaissance Center, the latest, located in Madison off I–55.
This evening, I came across a 28-minute YouTube video which recorded for posterity the last Christmas at Metrocenter. Made by Salvatore Amader as part of a series, it is a nostalgic trip into the past where old-timers (I’m talking about us, guys) can reconstruct their fond memories of what Metro was like in the seventies and eighties.

I was surprised that the mall was even open, but a portion of it still had businesses that were open. The owners of the mall had put up Christmas decorations, knowing that everything would close down by February. Today there are city offices in some of the mall and one large anchor store, but Metro, as we knew it, is gone.

Watch the video by clicking this link: Metrocenter Mall - Jackson, Mississippi | spectre of Christmas past
at February 18, 2019 No comments:

Venezuela in the Crosshairs

When a weak country determines to choose its own future, it usually finds that a larger and more powerful neighbor has other ideas.

Hugo Chavez, a former military officer, won the presidency of Venezuela in 1999, brought a new Bolivarian[1] constitution into being, and took control of PDVSA, the Venezuelan national oil company, using its profits for the benefit of the poor, instead of stuffing them into the bank accounts of the elite. For these outrageous acts Chavez’s Bolivarian party immediately became a target of the power elite in both Venezuela and the United States.

Since Chavez assumed office, four successive US administrations have repeatedly attempted to overthrow his government. The first attempt was in 2002, when the US supported a coup by the kleptocracy that ruled Venezuela before Chavez was elected. A massive uprising of the people defeated the coup and restored Chavez to power. After a number of years spent undermining the Bolivarian government headed by Chavez and then by Nicolas Maduro, the US is now supporting a slow-motion coup that is weakening Maduro’s government and tearing apart Venezuela. A precipitous drop in world oil prices, exacerbated by cruel economic sanctions imposed by the United States has decimated the economy. Like Chile in 1973, the ground is being laid.[2]

The speaker of the opposition-controlled National Assembly, Juan Guaido, has recently declared himself President. The US government, together with the sycophants making up its worldwide empire, has recognized this unelected, self-proclaimed pretender as the legitimate president of Venezuela. The inconvenient fact, that Maduro became president by winning a majority of votes in a fair election, is irrelevant.

While Maduro’s government still holds power, it relies upon 1) the poor who have been the chief beneficiaries of the Bolivarian government, 2) the army, and 3) the other security forces that still support Maduro. The US, along with the heads of neighboring governments, are even now enticing the ranking officers of the Venezuelan army to switch their allegiance to the pretender. If they succeed, Venezuelans can look forward to years of brutal, authoritarian, right-wing government, much like the one that ruled Venezuela before Chavez.

If you want to see who is causing the rioting, destruction, and violent demonstrations in the cities of Venezuela, examine carefully the complexion of the rioters pictured in the media. Members of the upper class in Venezuela are of European origin and are therefore light-skinned, whereas the poor are the descendants of indigenous Indians and former slaves, all of whom have dark skin.

Draw your own conclusions.

The upper crust, backed by the army and paramilitaries, has historically monopolized the vast resources of the nation for itself, while the indigenous population has suffered grinding poverty. The elite hated Chavez when he was in office. Now they hate Maduro because neither Chavez nor Maduro were one of them.

The US media is closing ranks by refusing to publish news or opinion contradicting the official narrative. It portrays the kleptocratic class not as former oppressors, but as victims of the Chavistas, especially Maduro and his government. They report demonstrations, often violent, as the work of Maduro and his supporters. They demonize Maduro and his government as vicious authoritarians. They label the Bolivarian democracy established by Chavez as communist, socialist, dictatorial, inept, destructive, or by any other label they can use to defame the current, legimately elected, government. While not yet hanging by a thread, Maduro is being forced to deal with a slow-motion coup. A large segment of the population still suports Maduro, however, and would likely resist in the event of a coup or a US invasion.

Over the last few days, Twitter and Facebook have blocked thousands of accounts that support the Bolivarian government, justifying their actions on grounds of violation of their terms of usage. Venezuelan Analysis, a source of alternative news and information about Venezuela since 2003, was one of these[3]. The media companies have been cagey as to exactly which of their terms these account holders have violated. Google has refused to carry their advertisments for some time and now has reduced the page rank of websites that support Maduro. The latter action is a subtle way of disappearing websites that contradict the propaganda of the U.S. power elite.

The Bush administration invaded Iraq in 2003 under similar pretenses and attracted the same support from the media and the military-industrial complex. Dissenting voices were silenced or fired. Phil Donahue, one of the most popular commentators on his network, was summarily dismissed after voicing his opposition to the invasion on the air[4]. A large proportion of the American public believed the lies that the Bush administration spread throughout the media. Although massive demonstrations took place all over the world in opposition to the invasion, the invasion proceeded on schedule and led to a chain of consequences that plague the middle east to this day. The only beneficiaries of that invasion were military contractors (paid by the rest of us).

It will be the same this time. Even if the US does not succeed in conquering Venezuela, the contractors will be the real victors.